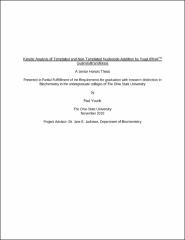 The central dogma of DNA and RNA replication invokes the widely accepted rule of 5'- 3' synthesis of nucleic acids. The discovery of the tRNAHis guanylyltransferase (Thg1), which adds nucleotides to nucleic acid substrates in the 3'-5' direction, is the first exception to the rule. Since the reactions catalyzed by Thg1 are biochemically unprecedented, determination of the mechanism by which Thg1 catalyzes 3'-5' nucleotide addition is of great interest. Previous work in yeast Thg1 (yThg1) identified two residues that were involved in the adenylylation step of the 3'-5' addition reaction. The structure of yThg1 is not known, but the recently published high resolution crystal structure of the human Thg1 homolog inspired us to examine the analogous residues in the context of human Thg1 (hThg1) (Hyde et al., 2010). Our data suggests that similar to yThg1, K44 is a key player in binding the nucleotide (NTP) that is being added, while N158 may be involved in the chemistry of the adenylylation used to activate the tRNA. Saccharomyces cerevisiae Thg1 incorporates nucleotides in both template-dependent and template-independent reactions – two fundamentally distinct activities (Jackman & Phizicky, 2008). To understand the biochemical basis for these two activities we measured the kinetics of specific steps during Thg1 catalysis. Rates of incorporation of each ribonucleotide across from adenosine (A73), cytidine (C73), and guanosine (G73) were measured under single turnover conditions using an assay that specifically isolates the nucleotidyltransfer step. Our data strongly suggests that Thg1 displays two kinetically distinct mechanisms where the 73rd nucleotide in the tRNA substrate is critical in determining the mode of catalysis. While Thg1 demonstrates unusual kinetics for tRNA substrates containing an adenosine at the 73rd position (A73), it displays characteristics and behaves very similar to a canonical replicative polymerase with substrate tRNAs containing other nucleotides at that position. Finally, we were able to show that Thg1 incorporates useful nucleotide analogues with moieties such as dyes and biotin at the 5' position, which will be implemented to further study the novel mechanisms employed by the enzyme.