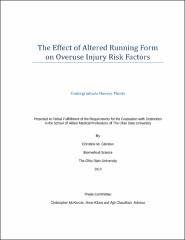 Running is a popular sport with more competitive participants every year. This rise in popularity has contributed to a rise in prevalence of overuse injuries such as patellofemoral pain, iliotibial band syndrome, and tibial stress fractures. While it is widely believed by coaches and runners that running form, which includes core control and position, plays an important role in injury prevention, little quantitative data exists to support these claims. The impact of altering running form on biomechanical loadings, as well as the best method to achieve changes, is unknown. Previous studies have explored the association of biomechanical loadings with particular overuse injuries, but the impact of core stability and control on those loadings is unknown. Pelvic tilt is a factor in core control and can indicate weakness or abnormal muscle activation in the trunk, and so may also play a role in changing loadings during motion. To explore the association between pelvic tilt and biomechanical loadings associated with running overuse injuries, and to test the effects of one type of technique instruction for running biomechanics, human subjects performed running tasks. Via motion and force capture technology, the gait cycle and loadings of the subjects were collected as they performed normal running and altered pelvic tilt running tasks. Loadings were calculated and normalized by body mass. Subjects were found to have the ability to change pelvic tilt in the anterior or posterior direction. Hip adduction moment and impulse were reduced when subjects altered running form by increasing anterior tilt, and these reductions may correlate to a decreased risk for iliotibial band syndrome. Further study and confirmation of this data is recommended. Advisor: Ajit Chaudhari