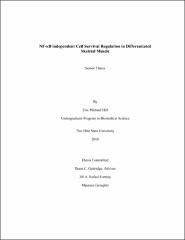 The transcription factor NF-κB has been shown to inhibit the differentiation of skeletal muscle cells via numerous molecular mechanisms and is believed to play an integral role in several skeletal myopathies. NF-κB has also been shown to play a vital role in inhibiting programmed cell death by up-regulating specific anti-apoptotic genes following a stressful stimulus. Interestingly, it has been reported that terminally differentiated skeletal muscle cells devoid of NF-κB activity do not undergo apoptosis when treated with the inflammatory cytokines interferon-γ and tumor necrosis factor alpha (TNFα). In this study, we examine the reported phenomenon using TNFα, an extrinsic signal for apoptosis as well as a potent activator of NF-kappaB, to better determine the role of NF-kappaB in the survival of skeletal muscle cells at different stages of the differentiation program. Using a C2C12 cell line stably expressing a plasmid coding for a dominant negative form of IκBα (IκBα-SR), it was shown that myoblasts lacking competent NF-κB activity were sensitized to TNFα-induced apoptosis, while identical IκBα-SR myotubes were not. To determine if C2C12 myotubes possess an intact TNFα signaling pathway, Western blotting for phosphorylated forms of p38 and JNK as well as reverse transcriptase-PCR for TNFα-activated genes were performed. It has recently been claimed that skeletal muscle differentiation evokes a natural reduction of apoptotic peptidase activating factor-1 (Apaf-1), a vital pro-apoptotic protein. Western blot analysis of IκBα-SR myoblasts and myotubes confirm that the natural reduction of Apaf-1 is present in C2C12 cultures, as well as indicate that the reduction is not dependent on NF-κB. To determine if this reduction in Apaf-1 could be the mechanism responsible for the NF-κB independent inhibition of apoptosis seen in skeletal myotubes, C2C12-IκBα-SR myoblasts were transiently transfected with an Apaf-1 expression plasmid and differentiated before being treated with TNFα. The over-expression of Apaf-1 in IκBα-SR myotubes did not rescue sensitivity to TNFα-induced apoptosis, as measured by levels of cleaved caspase-3 following treatment. Collectively, these findings indicate that the transcription factor NF-κB is vital to the survival of skeletal myoblasts, but not required to inhibit TNFα-induced apoptosis in skeletal myotubes. Additionally, we show that the reduction of Apaf-1 along the myogenic program is not required for the survival of terminally differentiated skeletal myotubes treated with TNFα. Future elucidation of the role of NF-κB and important anti-apoptotic mechanisms in mature skeletal muscle could lead to a better understanding of skeletal muscle differentiation as well as novel insight into numerous skeletal muscle diseases, including the pediatric muscle cancer rhabdomyosarcoma.