Carbon Nanostructures for Use in Oxygen Reduction 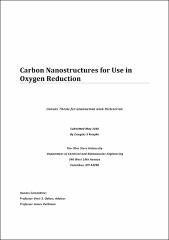 The Proton Exchange Membrane Fuel Cell (PEMFC) has shown promise as a replacement to the current media of transportation, the Internal Combustion Engine (ICE). Proliferation of this technology has been hampered by the cost and performance issues associated with the current cathodic, oxygen reduction reaction (ORR) catalyst, platinum. It has been shown that nitrogen – containing carbon nanofibers (N-CNFs) formed by the chemical vapor deposition (CVD) of hydrocarbons onto metal catalysts have activity for ORR. Despite being less expensive than platinum, N-CNFs still lack the performance of conventional catalysts. Understanding and controlling the growth of these nanofibers will allow researchers to engineer N-CNFs with optimum catalytic properties for ORR. For this reason, two studies were completed to better understand the CVD of hydrocarbon carrier gases over metallic catalysts. The first studied the effect of thiophene (C4H4S) addition to the acetonitrile (CH3CN) pyrolysis over a 2% Fe/ MgO growth catalyst at 900°C. The samples were characterized by Transmission Electron Microscopy (TEM), Temperature Programmed Oxidation (TPO) Experiments, Rotating Ring-Disk Electrode (RRDE) half cell testing, and nitrogen physisorption. It was found that addition of thiophene to the reactant acetonitrile causes an increase in carbon deposition onto the metallic growth catalyst. Increased growth caused an accompanying change in morphology from pristine stacked-cups to a more disordered stacked cup conformation. Despite a morphological shift, ORR activity and selectivity was not significantly affected as compared to the catalysts grown with acetonitrile only. In another study, the deposition of CO/H2 (4:1) over 6:4, 7:3 and 8:2 Fe:Cu co-precipitation catalysts were studied at temperatures ranging from 625°C-725°C and the nanofibers evaluated. The samples produced were characterized by TEM, Raman spectroscopy, and hydrophobicity testing. Samples showed remarkable growth, depositing up to 14 times the mass of the Fe: Cu growth catalysts. CVD at 725°C showed a decrease in growth and an increase in encapsulation of the metal particle suggesting partial deactivation of the growth catalyst. TEM characterization of the nanofibers showed that most of the catalyst formulations resulted in a platelet morphology, but other less-structured fiber types were observed. At high temperatures CVD favored the formation of multi-walled nanotubes (MWNTs). Analyses of Raman spectra reveal the presence of oxygen functionalities on the surface of the catalysts. In addition, it showed that the CNF have a large amount of graphitic edge plane exposure, indicating that they can be functionalized with nitrogen for use in ORR.