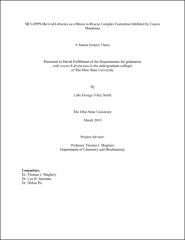 According to the American Cancer Society, one in four males and one in five females have a 100% lifetime risk of dying from cancer. Cancer is a major burden on modern society, from stealing away precious years of health to putting stress on an already over burdened health care system. While some drugs might work better on general types of cancer, it is plausible to create cures for cancers based on specific mutations found within key regulatory proteins. Two complexes that are relevant to cancer biology, and are prime targets for drug modification, include a p53/DNA complex and a BARD1/BRCA1 protein-protein dimer. Both complexes are commonly mutated in human cancers and many of those mutations inhibit formation of signaling complexes required for keeping cancerous growth in check. Using libraries of small, cyclic, genetically encoded molecules, made by the SICLOPPS method, it is possible to seek scaffolds for future cancer drugs. Before being able to screen with confidence, however, it is first necessary to study SICLOPPS molecule interactions on the functional screens used to monitor p53/DNA and BRCA1/BARD protein complex association and formation in order to learn how to optimize the screening process. In conclusion, insight was gained into how to use novel functional assays with SICLOPPS derived libraries and in the future large numbers of SICLOPPS molecules will be screened against important cancer associated complexes in order to rescue complex formation.