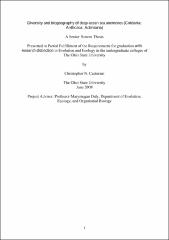 The deep sea and its fauna have been surveyed for over a century, but the ecosystems within had not been explored until the recent advent of maneuverable submersible vessels capable of deep diving. Historically, deep sea animals were blindly collected, poorly preserved, and under-described, leaving modern scientists little information on their attributes or ecology. We wanted to examine the relationship between deep ocean sea anemones and sites of hydrothermal activity. Specifically, we sought to identify taxa as potential vent fauna based on their geographic location, especially those collected without knowledge of their benthic environment. Using modern information on benthic topography and geology, we identify eight confirmed vent species and seven potential vent species from among forty-seven species of sea anemones in the deep Pacific Ocean. All of the confirmed vent species are known from a single vent or vent system, and all belong to different genera. Given this striking degree of endemicity, exploration of the vents and vent systems from which sea anemone diversity is undocumented is likely to be fruitful in terms of the discovery of new species and genera of Actiniaria. Alvinactis reu gen., sp. nov is a sea anemone which exemplifies the wealth of deep-ocean species to be discovered. We describe this novel genus and species from recent collections that targeted the diversity of fauna at the deep sea hydrothermal vents of the eastern North Pacific Ocean. The combination of characters in Alvinactis reu is unique among currently known genera of Mesomyaria; most notable among its external features is a belt of verrucae and cinclides in the distal column. We assess the placement of Alvinactis and evaluate taxonomic features used to distinguish groups within Actinostolidae Carlgren, 1893 and Actinoscyphiidae Stephenson, 1920 with a cladistic analysis of morphological characters. Phylogenetic analysis reveals that Alvinactis and several genera previously ascribed to Actinostolidae belong in Actinoscyphiidae. Morphological evidence fails to support monophyly of Actinostolidae, but does support monophyly of the previously proposed subfamily Actinostolinae.

The National Science Foundation Research Experience for Undergraduates (REU) program has provided funding that made this project possible.
The College of Biological Science’s Dean’s Undergraduate Research Fund also extended generous support.
The Pressey Honors Endowment Grant afforded funding for travel to the Evolution 2008 Meeting to present this research in July 2008.

The National Science Foundation
Assembling the Tree of Life: Cnidaria