The E2F activators are implicated in a cell survival requirement 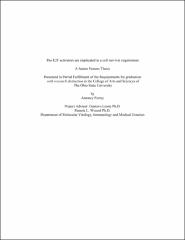 The pRB family, which includes p107 and p130 are known to control cell proliferation and differentiation (Mulligan and Jacks 1998). Their interactions with specific E2F transcription factors play a critical role in regulating the cell cycle progression. Wu et al, 2001 has shown that concomitant deletion of E2F1, E2F2, and E2F3 in Mouse Embryonic Fibroblasts (MEFs) renders them unable to proliferate. Since E2F1-3 have been implicated in driving expression of genes that promote the cell cycle, it was suggested that the inability of these cells to proliferate was due to a loss of gene expression. This in vitro analysis established that E2F3 must work alongside E2F1 and E2F2 to maintain normal proliferation. However, this conclusion had not been verified in differing cell types, and the in vivo importance of these conclusions was unknown. We show in this study that E2F1-3 are not required for cell proliferation or for differentiation of most cell types. Embryonic stem (ES) cells triply deficient for the E2F1-3 are able to proliferate, and teratomas formed from these cells are able to grow and differentiate. In vivo analysis using embryos triply deficient for E2F1-3 shows that they are able to survive until E9.5, suggesting that the activators are not essential during early embryogenesis. They are, however, critical for later stages of development. Similarly analysis of embryonic lenses deleted for E2F1-3 indicate their importance in particular tissues and highlights their potential role in cell cycle checkpoint regulation. The current study suggests a requirement for E2F1-3 in cell survival during development and begins to redefine the roles of E2Fs in vivo.