"For look you where my abridgement comes;" The Playability of Shakespeare's Variant Play Texts 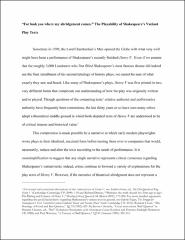 Shakespeare's plays were originally printed in varying conditions. Traditionally, the earlier, shorter printings have been understood as being derivative of the longer, original versions, even though the longer versions were frequently printed a full thirty years after the shorter first printings. The differences between texts have been attributed to corruption and/or abridgment introduced by performance. This study introduces a new metric to evaluate the way that texts would have been performed according to early modern practices of sundering a text into parts to be learned in isolation. Like their shorter counterparts, Shakespeare's lengthiest texts appear to have been written to make performance according to parts easier, thereby complicating the traditional explanation for textual variation.