The Role of Acute Intraspinal Hemorrhage After Spinal Cord Injury 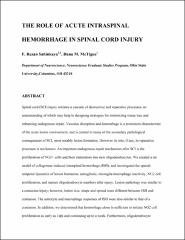 Spinal cord (SCI) injury initiates a cascade of destructive and reparative processes, an understanding of which may help in designing strategies for minimizing tissue loss and enhancing endogenous repair. Vascular disruption and hemorrhage is a prominent characteristic of the acute lesion environment, and is central to many of the secondary pathological consequences of SCI, most notably lesion formation. However its role, if any, in reparative processes is not known. An important endogenous repair mechanism after SCI is the proliferation of NG2+ cells and their maturation into new oligodendrocytes. We created a rat model of collagenase-induced intraspinal hemorrhage (ISH), and investigated the spatial-temporal dynamics of lesion formation, astrogliosis, microglia/macrophage reactivity, NG2 cell proliferation, and mature oligodendrocyte numbers after injury. Lesion pathology was similar to a contusion injury; however, lesion size, shape and spread were different between ISH and contusion. The astrocyte and macrophage responses of ISH were also similar to that of a contusion. In addition, we determined that hemorrhage alone is sufficient to initiate NG2 cell proliferation as early as 1dpi and continuing up to a week. Furthermore, oligodendrocyte numbers decreased by hemorrhagic injury are rapidly restored to normal levels by 7dpi. We have established that acute intraspinal hemorrhage following a SCI is not only the central initiating force for secondary injury cascades, but that it also plays a role in stimulating acute NG2 proliferation following injury.