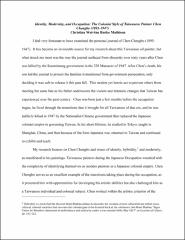 Identity, Modernity, and Occupation: The Colonial Style of Taiwanese Painter Chen Chengbo (1895-1947) I feel very fortunate to have examined the personal journal of Chen Chengbo (1895-1947). It has become an invaluable source for my research about this Taiwanese oil painter, but what struck me most was the way the journal surfaced from obscurity over sixty years after Chen was killed by the Kuomintang government in the 228 Massacre of 1947. After Chen’s death, his son hid the journal to protect the families it mentioned from government persecution, only deciding it was safe to release it a few months ago. This modest yet heroic act to prevent others from meeting the same fate as his father underscores the violent and dramatic changes that Taiwan has experienced over the past century. Preceding the Kuomintang, the Japanese occupied Taiwan (1895-1945), and Chen Chengbo’s paintings provide a window into Taiwanese life and the forces that shaped Taiwanese identity during these periods. My research focuses on Chen Chengbo and issues of identity, hybridity, and modernity, as manifested in his paintings. Taiwanese painters during the Japanese Occupation wrestled with the complexity of identifying themselves as modern painters in a Japanese colonial empire. Chen Chengbo serves as an excellent example of the transitions taking place during the occupation, as it presented him with opportunities for developing his artistic abilities but also challenged him as a Taiwanese individual and colonial subject. Chen worked within the artistic criterion of the colonizers and his exploration of this hybrid Taiwanese-Japanese culture in his paintings, as well as the seeming ease with which he moved from his work in Taiwan to Japan, to China, and finally back to Taiwan, highlights the complexity and cultural interchange of East Asian modernity in the early twentieth century. Chen, and his works, stand at the intersections of modernity, colonization, and the developing cultures of Taiwan, Japan, and China. As a painter, Chen was so broadly steeped in an all-encompassing East Asian cultural milieu that he, rather remarkably, became an award-winning artist in all three of these regions. My study aims to use his successful artistic career as a window into this cultural world of East Asia during the first half of the twentieth century, and in particular into the definitions of modernity and colonialist culture that developed in this non-European setting. While it may seem that events occurring so recently as the Japanese Occupation (which ended with the close of World War II) and the 228 Massacre would be well documented, there is a surprising lack of independent research in this field. In the decades following Chen’s death, the same forces that compelled his son to keep his journal hidden exerted pressure on scholarship about the colonization, suppressed information about the 228 Massacre, and restricted outside investigation. Much of the scholarship on Taiwanese art during the subsequent decades was heavily ideological and not terribly art historical. As a result, many subsequent studies treat Chen as a folk hero or attempt to advance a specific political agenda, making it difficult to distinguish the true story of Chen’s life from the messages that others wish to convey. In the last few decades, access to the factual evidence of the occupation and primary resources has increased dramatically. It is therefore extremely important to trace facts about Chen Chengbo and colonial Taiwan back to their primary sources to remove overt political biases and record the perspectives of eye-witnesses while they are still available. My sources are documents, such as the journal mentioned above, and others collected from archives, memories of individuals who lived through this period, and, most importantly, paintings that display the history of an island and an artist in constant transition. I have made several trips to Taiwan, Japan, and China to conduct interviews and to seek additional sources from museums, libraries, and archives in the cities where Chen was born, educated, displayed his work, and died. Some of the most important parts of these trips have been interviews with the artist’s son, Chen Tsung-Kuang, now 86 years old. In meeting with Mr. Chen, I have been very fortunate to obtain a personal perspective of Chen Chengbo’s life as well as to examine a countless number of Chen’s paintings, sketches, and writings, all from his son’s private collection. This collection of resources has helped in separating facts from inaccuracies in other accounts of Chen’s life. My goal is to explore the topics of identity and colonialism in the Japanese Occupation of Taiwan through the context of Chen and his painting. Because of the political, social, and even emotional nature of this subject, it has lent itself to misinterpretation and over-interpretation. For these reasons, there is a gap in the art historical literature. I hope that my research of Chen will highlight the value of cross-cultural perspectives and the significance of the development of identity within a colonial state. An additional, long-term goal in my research is to help define the unique stylistic features of Taiwanese artists and to build a framework for better understanding their works apart from and in light of Japanese and Chinese traditions. I have an opportunity to apply converging practices, methodologies, and ideas from within and outside of Taiwan to probe more deeply into Chen’s work, just as Chen’s painting drew from all of the various cultures he experienced. Where historical accounts have captured the broad strokes of the transitions of Taiwan, Chen’s paintings and the records of his life provide unique windows into the reality of an individual’s experience during this tumultuous period. His work stands as a testament to both the challenges and amazing possibilities of a world of converging cultures that is just as relevant today as it was in Chen’s time.