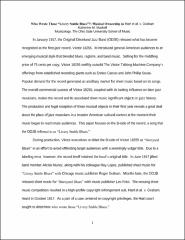 In 1917, the Original Dixieland Jazz Band (ODJB) released what has been recognized as the first jazz record. During production, a title change led to the copyright registration for the B-side of this record bearing the title, “Barnyard Blues.” Due to a labeling error, the record itself displayed the title, “Livery Stable Blues.” The unauthorized release of sheet music titled “Livery Stable Blues,” allegedly based on the B-side song, prompted the ODJB to release sheet music titled “Barnyard Blues,” and to file for an injunction against the competition on copyright infringement grounds. In the resultant case, Hart et al. v. Graham, the court determined substantial similarity between the two pieces of sheet music. Ultimately, the case was dismissed for lack of equity, and “Livery Stable Blues” was placed in public domain because the melody was deemed to be unoriginal. While Hart focused on questions of copyright appropriation, it also presented an issue for musicologists and legal historians about the nature of ownership. This paper seeks to understand ownership of a musical work as it pertains to “Livery Stable Blues,” using extant court records and period sources surrounding Hart as an evidentiary basis. It begins with a discussion of each party’s arguments in Hart. It then establishes a conceptual framework for ownership as it pertained to legal professionals and jazz musicians. This framework serves to organize and interpret source data from Hart in order to compare the ways in which these two communities conceived of musical ownership. Historically, Hart represents the first significant intersection of copyright law with the jazz community at the moment jazz began to reach mass audiences as a commercially popular music. The case reveals points of contention between the two communities with regard to musical ownership. Compared to the traditions established by jazz musicians, period copyright law provided a narrower scope of protection due to the publication formality predicated on written notation of musical works. As a result, the musician(s) who created and owned a musical work according to the jazz community were not necessarily owners with the legally protected right to control transmission, but rather the individual who could present evidence of publication for that musical work. This legal process proved to be problematic for “Livery Stable Blues,” which existed in oral transmission and on recording before it was rendered on sheet music. Despite the new tangibility afforded jazz by the advent of recording, copyright formalities limited the federal protection afforded jazz musicians for the large-scale transmission of their works.