The Past is Ever-Present: Civil Wars as a Dynamic Process 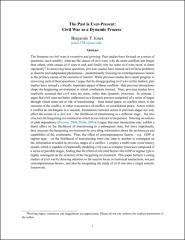 The literature on civil wars is extensive and growing. Past studies have focused on a series of questions, most notably: what are the causes of civil wars, why do some conflicts last longer than others, what causes civil wars to end, and finally why do some civil wars recur, at times repeatedly? In answering these questions, previous studies have treated each of these problems as discrete and independent phenomena -- predominantly focusing on contemporaneous factors as the primary causes of the outcome of interest. While previous studies have made progress in answering each of these questions, I argue that by disaggregating civil wars in this fashion, past studies have missed a critically important aspect of these conflicts --that previous interactions shape the bargaining environment in which combatants interact. Thus, previous studies have implicitly assumed that civil wars are static, rather than dynamic, processes. In contrast, I argue that civil wars are better understood as a dynamic process comprised of a series of stages through which states are at risk of transitioning -- from initial peace, to conflict onset, to the outcome of the conflict, to either a recurrence of conflict, or consolidated peace. Actors within a conflict do not bargain in a vacuum. Interactions between actors in previous stages not only affect the course of a civil war -- the likelihood of transitioning to a different stage -- but also structure the bargaining environment in which actors interact in the present. Drawing on notions of path dependency (Pierson, 2004; Diehl, 2006), I argue that past interactions may exhibit a direct effect on the likelihood of transitioning to a subsequent state, but more importantly, they structure the bargaining environment by providing information about the preferences and capabilities of the combatants. Thus, the effect of contemporaneous factors -- e.g. GDP or regime type -- on the likelihood of transitioning from one state to another is contingent on the information revealed in previous stages of a conflict. I employ a multi-state event history model, which is capable of empirically modeling civil wars as complex processes composed of a series of possible stages, finding that the effect of oft-cited factors like GDP or regime type is highly contingent on the structure of the bargaining environment. This paper furthers existing studies of civil war by drawing attention to the need to focus on historical interactions, not just contemporaneous factors, and also by integrating the study of civil war into a single analytic framework.