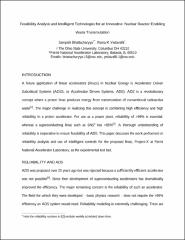 Nuclear energy has tremendous potential as a reliable source of cheap, clean energy. The two key impediments to expanded use of nuclear energy are safety, as highlighted by the accidents at Chernobyl and Fakushima; proliferation, as seen in the ambiguous nature of Iran’s nuclear program; and disposal of waste which remains dangerously radioactive for thousands of years. At present nuclear waste is stored at, and managed by, the power plant that generates it. This system was created as an interim solution, the intent being to allow the waste to “cool” (shorter lived isotopes to decay) before being transported to long term storage. Since the waste remains hazardous for ~100,000 years, “long term” is long indeed. From a technical standpoint, sites have been identified which meet the challenging geological requirements, in particular the proposed Yucca Mountain Repository. However, political opposition to the storage and transportation has all but killed this solution. New generations of reactors are designed to generate less waste, alleviating but not solving the problem. They can be made safer, but not passively safe (requiring no intervention to gracefully and safely shut down). They require fissile fuels (isotopes that can sustain a chain reaction), which are exactly the materials for nuclear weapons; thus proliferation issues remain. Recent developments have opened a new option: Accelerator Driven Subcritical System, ADSS. Here, a proton accelerator is used to produce neutrons, which in turn cause fission in the fuel. The nuclear reactions shut down without the accelerator, and the accelerator requires power from the reactor: it safely shuts down in the event of a system failure, i.e. is passively safe. Since neutrons are supplied externally, non-fissile materials, unsuitable for weapons, can be used as fuel: proliferation risk is virtually eliminated. But the most attractive feature of ADSS is it consumes rather than produces radioactive waste: actinide-rich waste from conventional reactors can be recycled and used as fuel in an ADSS reactor. ADSS can also use abundant (compared to uranium-235) natural isotopes, uranium-238 and thorium and produce waste with very little contamination of long-lived radioactive isotopes. ADSS (also known as just ADS, Accelerator Driven Systems; and ADSR, Accelerator Driven Subcritical Reactors) research is ongoing around the world, particular in China, India, and the European Union. One of the major challenges, and the one studies in this work, is building a proton accelerator with unprecedented efficiency, intensity, and reliability. Here in the US, an accelerator is under development at Fermi National Accelerator Laboratory (Illinois) which is intended primarily for basic research, but it also meets the intensity and efficiency requirements for ADSS. The reliability required by ADSS is, however, far beyond the experience of basic research [2]. Even short (few seconds) beam interruptions result in thermal stress and fatigue failure in the targets, the replacement of which is expensive, time consuming, and hazardous. Present accelerators have 80–90 such interruptions per year and under 90% availability, whereas ADSS requires less than five interruptions and >99% availability. Progress is being made in improving the underlying components, but that alone will not deliver the 10-fold improvement required. This work starts with the standard solution for improved reliability: redundancy. Redundancy is not trivially applied to an accelerator, however. Interaction between components is complex, and the positioning of components matters. Replacing a failed component with an online spare involves much more than simply turning the spare on. The entire system must be re-tuned for the new configuration. Furthermore, a beam powerful enough to drive a nuclear reactor is also powerful enough to destroy equipment if it strikes the wrong spot. The problem tackled is a control system to adjust for changing conditions and configurations, doing so within seconds, and without risk of additional damage in the process. This demands intelligent controls and automation for replacement, repair and tuning of the system. As there is no accelerator to collect data from, our results are based on simulations of the critical elements of the accelerator: an ion source, superconducting cavities, and superconducting magnets. The ion source produces particles to be accelerated; its lifetime is poor, thus in addition to redundancy, robotic replacement of failed units is included. Superconducting cavities are supplied with RF power which they transfer to the beam. In the event of a failure, the remaining cavities must be readjusted. Present accelerators start with a simple lookup table followed by manual fine-tuning. Application of intelligent adaptive control techniques [3] brings recovery time under a second. Superconducting magnets focus and steer the beam. Beam “optics,” particularly focusing/defocusing due to magnets, is a calculable ab initio but not in the time scale of seconds. Parameterization of beam behavior from full scale simulation and carefully designed monitoring are combined with intelligent controls to safely and quickly readjust magnets. The physics and fundamental of engineering for ADSS has been now known for two decades. Recent developments in superconducting cavities allow the required efficiency, inspiring extensive ADSS research around the world. What is lacking is sophisticated technology to ensure reliability. Implementation of the technologies discussed to optimize use of redundancy and “hot swap” spares can ensure high reliability, making this innovative waste transmuter and energy producer a reality. References: 1. Abderrahim et al., "Accelerator and Target Technology for Accelerator Driven Transmutation and Energy Production", (2010) http://www.science.doe.gov/hep/files/pdfs/ADSWhitePaperFinal.pdf 2. Yousry Gohar, David Johnson, Todd Johnson and Shekhar Mishra, “Fermilab Project-X Nuclear Energy Application: Accelerator, Spallation Target and Transmutation Technology Demonstration”, (2010). http://indico.fnal.gov/ 3. Nguyen, Krishnakumar, Boschovic ,“An Optimal Control Modification to Model-Reference AdaptiveControl for Fast Adaptation” AIAA Guidance, Navigation and Control Conference and Exhibit, August 2008, Honolulu, Hawaii