MICE INJECTED WITH E.COLI AS NEONATES HAVE HYPERACTIVE BEHAVIOR AND AN INCREASED MICROGLIAL INFLAMMATORY PROFILE 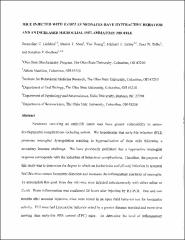 Newborns surviving an early-life insult may have greater vulnerability to neuro-developmental complications including autism. We hypothesize that early-life infection (ELI) promotes microglial dysregulation resulting in hyperactivation of these cells following a secondary immune challenge. We have previously published that a hyperactive microglial response corresponds with the induction of behavioral complications. Therefore, the purpose of this study was to determine the degree to which an Escherichia coli (E.coli) infection in neonatal BALB/c mice causes locomotor disorders and increases the inflammatory reactivity of microglia. To accomplish this goal, three day old mice were injected subcutaneously with either saline or E.coli. Brain inflammation was confirmed 24 hours after injection by RT-PCR. One and two months after neonatal injection, mice were tested in an open field behavior test for locomotor activity. ELI mice had hyperactive behavior noted by a greater distance traveled and more time moving than early-life PBS control (EPC) mice. To determine the level of inflammatory reactivity in microglia, young adult EPC and ELI mice were peripherally injected with saline or lipopolysaccharide (LPS) to provide a secondary immune challenge. Microglia were isolated 4 or 24 hours after challenge for mRNA analyses. Microglia from adult ELI mice had an amplified inflammatory profile following LPS-challenge compared to EPC mice. Exaggerated inflammatory cytokine production corresponded to increased Iba-1 immunoreactivity of microglia in the amygdala and hippocampus of ELI mice 48 hours following LPS. In conclusion, early-life infection led to hyperactive behavior and elevated microglial reactivity following a secondary immune challenge. Understanding the biochemical and immune complications that result from an early-life insult will provide new therapeutic targets to attenuate neurobehavioral complications, such as attention deficit disorder, autism, and schizophrenia.