Isomerization of Carotenoids During Processing of Tangerine Tomatoes 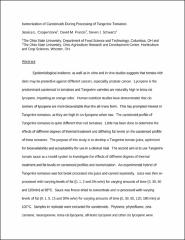 Epidemiological evidence, as well as in vitro and in vivo studies suggests that tomato-rich diets may be protective against different cancers, especially prostate cancer. Lycopene is the predominant carotenoid in tomatoes and Tangerine varieties are naturally high in tetra-cis lycopene, imparting an orange color. Human nutrition studies have demonstrated that cis isomers of lycopene are more bioavailable than the all-trans form. This has prompted interest in Tangerine tomatoes, as they are high in cis-lycopene when raw. The carotenoid profile of Tangerine tomatoes is quite different than red tomatoes. Little has been done to determine the effects of different degrees of thermal treatment and differing fat levels on the carotenoid profile of these tomatoes. The purpose of this study is to develop a Tangerine tomato juice, optimized for bioavailability and acceptability for use in a clinical trial. The second aim is to use Tangerine tomato sauce as a model system to investigate the effects of different degrees of thermal treatment and fat levels on carotenoid profiles and isomerization. An experimental hybrid of Tangerine tomatoes was hot break processed into juice and canned separately. Juice was then re-processed with varying levels of fat (0, 1, 2 and 3% w/w) for varying amounts of time (0, 30, 60 and 120min) at 88°C. Sauce was freeze dried to concentrate and re-processed with varying levels of fat (0, 1, 5, 15 and 30% w/w) for varying amounts of time (0, 30, 60, 120, 180 min) at 100°C. Samples in replicate were extracted for carotenoids. Phytoene, phytofluene, zeta-carotene, neurosporene, tetra-cis¬ lycopene, all-trans lycopene and other cis¬ lycopene were quantified using HPLC-PDA. Total carotenoids decreased with longer heating times. Phytoene and phytofluene were relatively heat stable. Tetra-cis lycopene decreased significantly with processing time but not with fat level. All-trans lycopene and other-cis lycopene increased significantly with processing. These results show the capability to modulate carotenoid bioavailability by food processing.