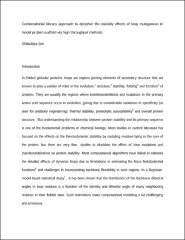 The inability to accurately predict the relationship between protein’s primary sequence and its overall stability presents a major hurdle in determining the effects of mutations on protein folding. To study the effects of mutation, combinatorial libraries that involve randomizing many selected positions of a protein simultaneously, offer a broader, statistically relevant dataset. In this study, we have analyzed this complicated sequence-stability relationship using rigorous high-throughput (HT) methods. Our studies focus on the four-helix model bundle protein Rop through the means of combinatorial repacking the loop. The loop was randomized with and without an additional residue to make it more flexible. Using a novel screen we identified functional variants of Rop that were of similar or higher in stability than the parent scaffold. HT biophysical characterization and detailed Gibbs-Helmholtz studies were carried out to probe the entropy and enthalphy contribution on stability for selected variants. A potential salt bridge interaction was necessary to enhance the stability of the protein without affecting its function or fold.