A Classification of Extraterrestrial Spherules Found in Sedimentary Rocks and Till 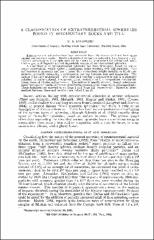 Extraterrestrial spherules have been recovered from Pleistocene drift and from more ancient sedimentary rocks. Modern deposits also contain spherules, but, because a significant percentage of these spherules can be shown to be of recent terrestrial and industrial origin, such deposits are not dependable sources of extraterrestrial spherules. A classification of extraterrestrial spherules has been developed, based on microscopic observation, which shows a continuous series between two end members. One end member is magnetic and has a luster that varies from bright metallic to black submetallic, probably indicating a composition varying between iron and magnetite. The surface is notably reticulated. The other end member is nonmagnetic and is a generally colorless to amber-colored, transparent glass, probably with a composition varying between those of olivine and pyroxene. The surface is usually smooth, though submicronsized "percussion" marks or micron-sized indentations may be observed on some specimens. These members are referred to as Type I and Type III, respectively. Spherules intermediate between these end members are called Type II.