Weathering in a Sangamon Paleosol 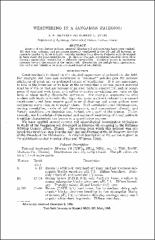 Aspects of weathering in loam-textured Illinoian till and overlying loess were studied. Silt-size iron, calcium, and potassium minerals weathered in the B2 and B3 horizons in amounts similar to those in fairly youthful modern Gray-Brown Podzolic soils developed in loess along the Mississippi River. In the clay fraction, weathering procedes from illite through expandable vermiculite to chloritic vermiculite. Kaolinite occurs in increasing amounts toward the surface of the buried soil. Despite its age and physical appearance, this soil is not judged to be in an advanced stage of weathering.