Summary and Analyses of Surface Mass Balance Compilations for Antarctica, 1960-1985 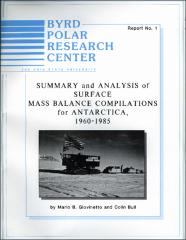 An analytical review is given of twenty-four compilations of surface mass balance for Antarctica produced between 1960 and 1985, with emphasis on their chronological development and the growth of the point-specific data base from approximately 175 to more than 1500 locations, as reported in approximately 225 identified sources. It is shown that the data collected in Antarctica during the exploration phase of surface glaciology studies (1956-68) and reported in the years 1958-71, are widespread and remain a considerable contribution to our present knowledge of the surface balance on the continent. The compilations which appeared after 1971 illustrate that the data base has improved principally in the coastal zone, including the major ice shelves and inland areas near their grounding lines. Some selections of alternate data sets and interpolations thereof produce differences of 25 percent to 75 percent in estimates of regional rates of surface balance for large areas. It is suggested that further improvement in the compilations may be achieved by making this selective approach rather than using all the available data.