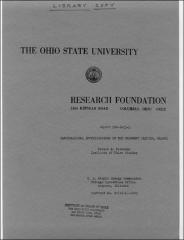 The Casement Glacier (58°57’ N, 135°57’ W) is located in Glacier Bay National Monument in southeast Alaska. It is a complex valley glacier formed by the merging of at least seven smaller tributaries with the main ice stream. The entire system has an area of 125 to 150 km2 with neve basins at elevations between 1200 and 1700 m (4000 and 5000 ft). The terminus is now located about 6.7 km northeast of Muir Inlet, where it joined with the Muir Glacier at the beginning of the present century. The U.S. National Park Service has greatly assisted this project by transporting the party and its equipment and supplies from Juneau to the Casement Glacier outwash aboard the National Park Service vessel Nuntak. The party was moved by helicopter from the outwash to the selected campsite. During the first year, 1965, only one camp was established, at an elevation of 300 m (1000 ft). From this camp it was possible to do intensive work in the lower portion of the ablation zone of the glacier. The main camp for the 1966 season was located farther upglacier, 32 km from Muir Inlet and at an elevation of 1050 m (3400 ft) so as to provide access to both the upper reaches of the ablation zone and the accumulation zone. In addition, tent camps were set up at the 1965 campsite and at the location of the tunnel dug during the 1966 season. The first two seasons, 1965 and 1966, were each ten weeks long and the 1967 season was extended to twelve weeks (until mid-September) in order to make the final mass balance measurements as late in the ablation season as possible.