An Efficient Algorithm for the Synthesis of Laser Altimetry Waveforms 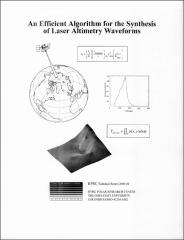 Airborne and spaceborne laser ranging is an emerging technology for capturing data on physical surfaces. An ever increasing number of applications takes advantage of the dense sampling, the high accuracy, and the direct way to obtain 3-D surface points that characterizes laser ranging methods. Most laser altimeters estimate the range to the terrain surface by measuring the round-trip time of flight of a short laser pulse. Laser systems are suitable sensors for rapid surface reconstruction since surface points can easily be computed from the measured range, and from the position and altitude measurements. The small illuminated footprint size and the high precision time measurements ensure reliable ranging and sub-dm vertical range resolution even from orbital altitudes. The heart of the laser system is the laser ranging. The accuracy of the timing (or ranging) performance is governed by the characteristics of the laser system and terrain surface, as well as the waveform processing. Closed form expression describing the shape of the return waveform have been derived only for simple cases, such as flat or uniformly sloping terrain (Gardner, 1982). Laser altimetry simulators are developed to explore the relationship between the altimeter's design, performance and terrain characteristics for more complex surface topography. The Laser altimetry Simulator developed at NASA Goddard Space Flight Center (Abshire et al., 1984) provides a mean for computing the receiver waveform for user defined, arbitrary two-dimensional (height versus along track distance) terrain geometry and for a few, simple 3-D surface types. To investigate the performance of laser systems over complex topography we developed a 3D space-time laser altimetry simulator, which we call Byrd Polar Research Center (BPRC) simulator. This report describes the BPRC simulator. First a brief description of laser altimeter systems is presented followed by the discussion of the characteristics of the returned laser pulse shape for simple surfaces and ranging schemes. The algorithm implemented in the BPRC simulator for waveform computation is summarized in the third chapter. Returned waveforms are presented and compared with results obtained by the NASA/GSFC simulator in the last, fourth chapter.