Investigations of the Upper Snow Pack at Summit, Greenland. Report of the July 2004 Field Season 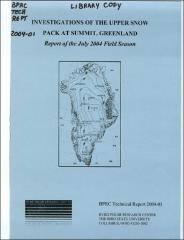 Three detailed snow-pit studies were completed around the Summit Camp in central Greenland during July 2004. At each site the temperature of the snow pack was measured with a digital thermometer and the thickness of different layers. the snow stratigraphy and the snow crystal size were documented. Snow samples were taken at 5 cm intervals with a tube of known volume and a steel box of known volume, the contents of which were later weighed on a scale in order to determine the density of the snow. Also oxygen isotope samples were taken from one pit for analysis to get an estimate of the age of the snow. Three shallow cores were extracted and snow samples were taken in 10 cm intervals for isotope analysis and density measurements. The melt water samples were brought back to the laboratory at BPRC (OSU) for isotope analysis. This report is a summary of the findings and preliminary results of this field investigation.