EVALUATING THE EFFECT OF SUPER FINISHING ON GEARS 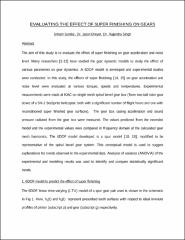 The aim of this study is to evaluate the effect of super finishing on gear acceleration and noise level. Many researchers have studied the gear dynamic models to study the effect of various parameters on gear dynamics. A 6DOF model is developed and experimental studies were conducted. In this study, the effects of super finishing on gear acceleration and noise level were evaluated at various torques, speeds and temperatures. Experimental measurements were made at KAC on single mesh spiral bevel gear box (from two tail rotor gear boxes of a SH-2 SeaSprite helicopter, both with a significant number of flight hours and one with reconditioned super finished gear surfaces). The gear box casing acceleration and sound pressure radiated from the gear box were measured. The values predicted from the extended model and the experimental values were compared in frequency domain at the calculated gear mesh harmonics. The 6DOF model developed is a spur model, modified to be representative of the spiral bevel gear system. This conceptual model is used to suggest explanations for trends observed in the experimental data. Analysis of variance (ANOVA) of the experimental and modeling results was used to identify and compare statistically significant trends.