Oxytocin: Mediating the Beneficial Effects of Social Interaction on Health 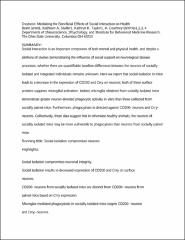 Social interaction is an important component of both mental and physical health, and despite a plethora of studies demonstrating the influence of social support on neurological disease processes, whether there are quantifiable baseline differences between the neurons of socially isolated and integrated individuals remains unknown. Here we report that social isolation in mice leads to a decrease in the expression of CD200 and Crry on neurons; both of these surface proteins suppress microglial activation. Indeed, microglia obtained from socially isolated mice demonstrate greater neuron-directed phagocytic activity in vitro than those collected from socially paired mice. Furthermore, phagocytosis is directed against CD200- neurons and Crry- neurons. Collectively, these data suggest that in otherwise healthy animals, the neurons of socially isolated mice may be more vulnerable to phagocytosis than neurons from socially paired mice.