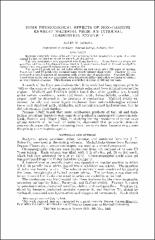 Exhaust materials were collected from a four-cylinder automobile engine that consumed 1 quart of lubricating oil for each 5 gal of gasoline. The oily condensate was separated into three fractions. These fractions contained paraffins, olefins, and cycloparaffins as fraction I, aromatics as fraction II, and non-hydrocarbons and oxygenated compounds as fraction III. The solvents produced no noticable effects on test mice after 279 days of testing. Fractions I and II produced ulcerated sores which formed thick scabs. Fraction II also produced a small amount of cancerous cells at the site of application. Fraction III produced thin scabs and was associated with hyperirritability and other evidence of central nervous system changes. This fraction was lethal in doses of 100 mg per week.