Associations of turbidity and diet in smallmouth and spotted bass and creek chubs of the Scioto River Basin, OH: A preliminary assessment 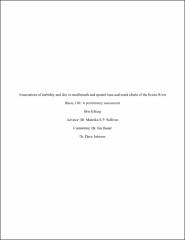 The primary objective of this study was to examine the effects of turbidity on fish diet and condition. In order to do this, eight stream reaches (i.e., study sites) were selected in two streams of different sizes (small stream – Slate Run, large river – Scioto River). At each study site, measurements of turbidity were recorded at multiple locations. From small stream sites, creek chubs (Semotilus atromaculatus) were collected for gut content analysis to explore potential differences in diets and fish condition among turbidity levels. Likewise, smallmouth bass (Micropterus dolomieu) and spotted bass (Micropterus punctulatus) were collected from the Scioto River and subsequently analyzed. Using a combination of t-tests, correlation, and regression analyses (including potential non-linear responses), differences in turbidity among sites and the potential effects of turbidity on dietary composition were investigated. Turbidity between small stream and large river sites was compared using a t-test and found to have significant variation (α = 0.05). Fish condition, as determined by Fulton’s Condition Factor, had a cubic relationship with turbidity and explained 98.8% of the variation in condition. Although this study was constrained by a small sample size and limited temporal variability in sampling, there was evidence that turbidity levels affect prey type. Turbidity accounted for 75.4% of the variation of crayfish being consumed, and smallmouth bass ate significantly more of this prey item than the other two study species. Overall, the three main prey sources (fish, crayfish, and aquatic insects) had a positive linear relationship with turbidity. This study provides important preliminary information for the effects of turbidity on stream fish condition and diet, and is expected to help inform larger efforts in the region related to land use and riverine food webs.