A Glacial History of the South Shetland Islands, Antarctica 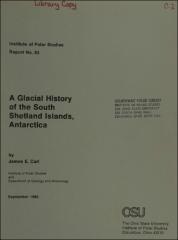 Institute of Polar Studies Report No. 63.

A glacial geology program was conducted in the South Shetland Islands. Field investigations concentrated on Byers Peninsula, Fildes Peninsula and in coastal embayments. The tentative glacial history reconstructed for the South Shetland Islands demonstrates at least two distinct ages of glaciation separated by a warmer climate interval that is interpreted as the Sangamon Interglacial. Radiocarbon dates and lichenometric ages suggest that two late Neoglacial advances occurred at approximately 1475 A.D. and 1720 A.D. The ice margins have thinned gradually since the Neoglacial fluctuations probably in response to the secular warming trend that commenced recently and extended until about 1940. Both the long-term and short-term glacial fluctuations in the South Shetland Islands appear to be broadly synchronous with world-wide climatic trends.