A Non-steady Ice-sheet Model Incorporating Longitudinal Stresses: Application to the Adjustment of Interior Regions of an Ice Sheet to Changes in Sea Level 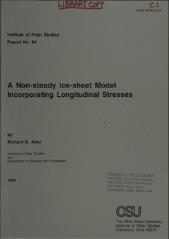 Institute of Polar Studies Report No. 84.

In order to study the effect of sea-level changes on inland ice sheets, a new ice-flow model has been developed that explicitly includes longitudinal stresses. Two-dimensional flow is assumed, and the flow-law parameter and longitudinal-deviatoric stress are taken to be weighted averages over depth. The flow-law equations for longitudinal and shear deformation are then averaged over thickness. The resulting equations, together with continuity and a bottom-sliding relation, form a simple one-dimensional system of equations that describes changes in ice-sheet configuration over time. Sea-level rise causes a wave of thinning to propagate upglacier in an ice sheet with terminal position controlled by sea level. The wave of thinning slows, diffuses, and is damped as it moves upglacier; thus, perturbations near the coast must be large and be long lasting to affect inland regions. Model calculations show that post-Wisconsinan sea-level rise has caused 110 m thinning at Dome C, East Antarctica, and that response is now 70 percent complete. Accumulation rate probably increased at the same time, however, and including this in the model reduces calculated thinning. For a 10 percent increase in accumulation rate from Wisconsinan to Holocene, there has been 75 m post-Wisconsinan thinning due to combined effects of sea-level rise and accumulation-rate increase.

Copyright 1983; used by permission of the author.