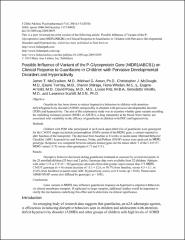 James T. McCracken et al , "Possible Influence of Variant of the P-Glycoprotein Gene (MDR1/ABCB1) on Clinical Response to Guanfacine in Children with Pervasive Developmental Disorders and Hyperactivity," Journal of Child and Adolescent Psychopharmacology 20, no. 1 (2010), doi:10.1089/cap.2009.0059

Objective Guanfacine has been shown to reduce hyperactive behaviors in children with attentiondeficit/ hyperactivity disorder (ADHD) and possibly in children with pervasive developmental disorder (PDD) and hyperactivity. The aim of this exploratory study was to examine whether gene variants encoding the multidrug resistance protein (MDR1 or ABCB1), a drug transporter at the blood–brain barrier, are associated with variability in the efficacy of guanfacine in children with PDD and hyperactivity. Methods Children with PDD who participated in an 8-week open-label trial of guanfacine were genotyped for the C3435T single-nucleotide polymorphism (SNP) variant of the MDR1 gene, a variant reported to alter function of the transporter. The decrease from baseline to 8 weeks in parent-rated Aberrant Behavior Checklist (ABC) hyperactivity and Swanson, Nolan, and Pelham (SNAP) scores were analyzed by MDR1 genotype. Response was compared between subjects homozygous for the minor allele T of the C34535T MDR1 variant (T/T) versus other genotypes (C/T and C/C). Results Disruptive behavior decreased during guanfacine treatment as assessed by several end points in the 25 enrolled children (23 boys and 2 girls). Genotype data were available from 22 children. Subjects with either C/T or C/C (n = 16) genotypes showed a three-fold greater improvement than T/T MDR1 C3435T genotype (n = 6) (mean decrease of 15.1 ± 12.6, or 50.7% from baseline, versus 4.5 ± 5.1, or 15.6% from baseline) in parent-rated ABC Hyperactivity scores over 8 weeks (p = 0.03). Parent-rated ADHD SNAP scores also differed by genotype ( p = 0.05). Conclusions Gene variants in MDR1 may influence guanfacine response on hyperactive-impulsive behaviors via altered membrane transport. If replicated in larger samples, additional studies would be important to clarify the mechanisms underlying this effect and to determine its clinical significance.