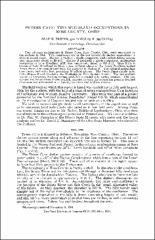 Two adjacent rockshelters in Peters Cave, Ross County, Ohio, were excavated by the authors in 1964. This constitutes one of the few systematic shelter excavations in Ohio in recent years. Shelter A yielded a single-component, undisturbed Adena occupation tentatively dated to 50 B.C. Shelter B produced a single-component, undisturbed occupation of Late Woodland affiliation, tentatively dated to 800 A.D. Since little is known of Late Woodland in Ohio, a new cultural phase of the Scioto Tradition, named Peters Phase, has been denned from the material in Shelter B. The cultural assemblage here shows continuity from preceding Woodland phases. The Peters Phase clearly postdates Hopewell and pre-dates the Mississippian Fort Ancient Aspect. The two shelters served as temporary hunting camps, probably occupied only during summer. The vertebrate and invertebrate fauna found in association with the occupation permits detailed discussion and interpretation of hunting practices and food preferences.