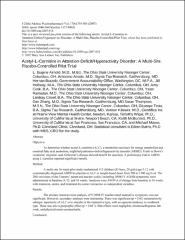 Objective: To determine whether acetyl-L-carnitine (ALC), a metabolite necessary for energy metabolism and essential fatty acid anabolism, might help attention-deficit/hyperactivity disorder (ADHD). Trials in Down’s syndrome, migraine, and Alzheimer’s disease showed benefit for attention. A preliminary trial in ADHD using L-carnitine reported significant benefit. Method: A multi-site 16-week pilot study randomized 112 children (83 boys, 29 girls) age 5-12 with systematically diagnosed ADHD to placebo or ALC in weight-based doses from 500 to 1500 mg b.i.d. The 2001 revisions of the Conners’ parent and teacher scales (including DSM-IV ADHD symptoms) were administered at baseline, 8, 12, and 16 weeks. Analyses were ANOVA of change from baseline to 16 weeks with treatment, center, and treatment-by-center interaction as independent variables. Results: The primary intent-to-treat analysis, of 9 DSM-IV teacher-rated inattentive symptoms, was not significant. However, secondary analyses were interesting. There was significant (p = 0.02) moderation by subtype: superiority of ALC over placebo in the inattentive type, with an opposite tendency in combined type. There was also a geographic effect (p = 0.047). Side effects were negligible; electrocardiograms, lab work, and physical exam unremarkable. Conclusion: ALC appears safe, but with no effect on the overall ADHD population (especially combined type). It deserves further exploration for possible benefit specifically in the inattentive type.