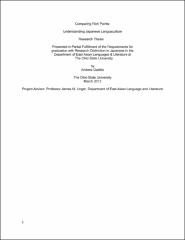 This paper examines a particular instance of the relationship between Japanese language and culture in detail. The case in point is the Sino-Japanese noun doo borrowed from Chinese (dao ‘road, way’ 道) in the 1st millennium CE. This Chinese word has long had a strong metaphorical connotation (spiritual path or way) since the classics of the 1st millennium BCE, most notably the Daodejing 道徳経 of Laozi 老子. Today, SJ doo is frequently used as a suffix in nouns with meanings that connote a spiritual path or way, or at least some method of self-cultivation. Since the character 道 is customarily glossed miti ‘road, path’, this native noun too now has a metaphorical connotation. I focus on these Japanese words because, as I will argue, they provide a good test of a general theory of meaning proposed in George Lakoff and Mark Johnson’s work Metaphors We Live By. Lakoff and Johnson argue convincingly that metaphors are not just literary or poetic uses of words separate from ordinary language use. Metaphorical relations, in their view, are essential to how speakers of a language deal with meanings. One of their key examples is the journey metaphor seen in such English sentences as “we arrived at a conclusion” and “I don’t think our relationship is going anywhere.” For Lakoff and Johnson, such sentences illustrate the metaphors ARGUMENTS ARE JOURNEYS and LOVE IS A JOURNEY. By comparing Japanese doo and miti ‘road, path’ with English ‘journey’ in this context, we can find similarities and differences that can be understood in terms of the concepts languaculture and rich points as discussed by Michael Agar in his study Language Shock. Agar argues (1) that language use cannot be understood outside the cultural context in which it occurs, and (2) that conspicuous differences in the way two languacultures talk about the same or similar real-world facts and events reveal how they are structured. Human beings have much in common all over the world, so similarities in languacultures are numerous and expected, at least for people living in similar ecological circumstances. Rich points stand out precisely because they are unexpected in two languacultures, especially those out of direct contact for long periods of time. By comparing Japanese doo and miti with English ‘journey’ in Lakoff and Johnson’s sense, I propose to show that the journey metaphor is the locus of an important rich point. I will identify examples of Japanese sentences that use these words and describe the similarities and differences between them and pertinent sentences of English.