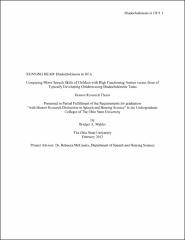 Motor speech function assessments have long been used to help determine diagnoses and treatments for speech-language pathology clients that are suspected of having apraxia, dysarthria, or other frank motor speech disorders. However, motor speech function is rarely assessed in children who may show more subtle motor speech problems, such as speech clients with autism spectrum disorders (ASDs), developmental disorders that primarily affect the development of social and communication skills. The purpose of this study is to look at the particular speech motor task of diadochokinesis (DDK) and determine whether there are group or stimulus type effects on performance. Specifically, (1) are there differences between children with high functioning autism (HFA) and typically developing (TD) children on DDK measurements (rate, accuracy, and consistency)?, and (2) do participant groups differ in their performance on monosyllabic versus multisyllabic stimuli?. To perform this study, two groups (HFA and TD children) were given the DDK task of repeating monosyllabic sounds (/pa/, /ta/, and /ka/) and then multisyllabic sounds (/pataka/) as long and as fast as they could. Mean performances from both groups were compared on the measurements of rate, accuracy, and consistency. The results showed that the HFA group performed generally faster rates across the tasks, but had significantly lower accuracy and consistency scores than the TD group. The findings also showed that, in terms of rate, all participants performed more poorly on the multisyllabic task than the monosyllabic tasks, regardless of group membership. Although the number of participants was small, this study showed promising results in using the DDK task to assess the motor speech skills in children with autism. Further studies are suggested for looking at the importance of rate, accuracy, and consistency in the utterances of HFA children.