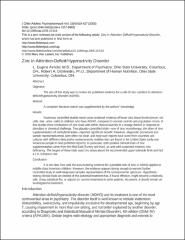 Objective: The aim of this study was to review the published evidence for a role of zinc nutrition in attentiondeficit/ hyperactivity disorder (ADHD). Method: A computer literature search was supplemented by the authors’ knowledge. Results: Numerous controlled studies report cross-sectional evidence of lower zinc tissue levels (serum, red cells, hair, urine, nails) in children who have ADHD, compared to normal controls and population norms. A few studies show correlations of zinc level with either clinical severity or a change thereof in response to stimulant or chemical challenge. Two placebo-controlled trials—one of zinc monotherapy, the other of zinc supplementation of methylphenidate—reported significant benefit. However, diagnostic procedures and sample representativeness were often not clear, and most such reports have come from countries and cultures with different diets and/or socioeconomic realities than are found in the United States (only one American sample in nine published reports). In particular, both positive clinical trials of zinc supplementation came from the Mid-East (Turkey and Iran), an area with suspected endemic zinc deficiency. The largest of these trials used zinc doses above the recommended upper tolerable limit and had a 2 in 3 dropout rate. Conclusion: It is not clear how well the accumulating evidence for a possible role of zinc in ADHD applies to middle-class American children. However, the evidence appears strong enough to warrant further controlled study in well-diagnosed samples representative of the socioeconomic spectrum. Hypothesistesting clinical trials are needed of this potential treatment that, if found effective, might become a relatively safe, cheap substitute for, or adjunct to, current treatments in some patients. At present, it should remain an investigational treatment.