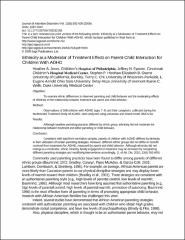 Objective: To examine ethnic differences in observed parenting and child behavior and the moderating effects of ethnicity on the relationship between treatment and parent and child behavior. Method: Observations of 508 children with ADHD (ages 7–9) and their caregivers, collected during the Multimodal Treatment Study of ADHD, were analyzed using univariate and mixed-model ANOVAs. Results: Although baseline parenting practices differed by ethnic group, ethnicity did not moderate the relationship between treatment and either parenting or child behavior. Conclusion: Consistent with data from normative samples, parents of children with ADHD differed by ethnicity in their utilization of certain parenting strategies. However, different ethnic groups did not differ on benefit received from treatments for ADHD, measured by parent and child behavior. Although ethnicity did not emerge as a moderator, ethnic minority family engagement in treatment may be increased by recognizing different parenting strategies and modifying interventions accordingly. (J. of Att. Dis. 2010; 13(6) 592-600)