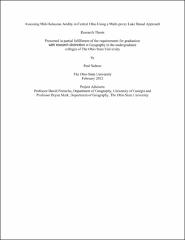 The continental interior of North America experienced a period of prolonged warming and aridity during the Mid-Holocene. Although the general span of maximum warmth and dryness is believed to have been about 6,000 years BP during the Holocene Thermal Maximum, the regional variability, environmental response, and timing of this event are complex and not fully understood. To better understand the nature of this period for Central Ohio three paleolimnologic proxies (Carbon to Nitrogen ratios (C:N), percent organic Carbon as estimated through loss on ignition (LOI), and sub-fossil midge remains) are analyzed from a sediment core collected from Smoot Lake (Licking County, Ohio) to reconstruct the Holocene paleoenvironmental record for Central Ohio. Sub-fossil midge remains in particular are a useful paleolimnologic proxy that has not yet been utilized in the Midwest. The proxies are interpreted as indicators of effective moisture from interpreted changes in lake levels. This study found that an extended period of low lake levels existed during the early Holocene reaching maximum dryness at 8,500 years BP with levels recovering by 7,000 years BP. Another shorter period of aridity is centered around 3,500 years BP. This study demonstrates that sub-fossil midge remains are a valuable proxy for changes in lake levels. Should future climate return to the warmer levels recorded during the Mid-Holocene, effective moisture is also likely to decrease which will have ecological and societal implications for Central Ohio.