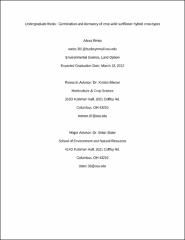 Gene flow from agricultural crops into related wild plant populations can produce viable hybrid offspring with characteristics that differ significantly from those of their wild counterparts. Such crop-wild gene flow, especially in situations involving transgenic crops, has raised concerns about potential losses of genetic diversity, or increases in invasiveness, of wild relatives. The annual sunflower (Helianthus annuus) is an ideal species for studying crop-wild gene flow, the subsequent hybrid generations produced, and the effects on wild populations because the crop and wild types are often found in close proximity, are cross compatible, share pollinators, and are differentiated for important traits that may affect fitness, such as seed dormancy. Outside of cultivation, seeds that germinate in the fall are killed by the winter frost before reproducing, which has lead to the evolution of dormancy in wild populations; their seeds must experience a cold period before germinating in the spring. By contrast, cultivated varieties have been artificially selected to germinate immediately under favorable conditions. Consequently, the degree to which crop-wild hybrids germinate under fall conditions affects the extent to which crop genes may persist in, or introgress into, wild populations. Furthermore, the germination and dormancy characteristics of sunflower seeds, in particular, are due, in part, to the structural characteristics of their achenes (i.e., seeds and hulls). Most of these structures are maternally inherited while the genetics of the embryo involve contributions from both parents. This project determined the rates of germination and dormancy of fifteen crop-wild hybrid sunflower cross types and used microscopy to explore achene characteristics that could influence the differential germination we observed. Maternal effects (e.g., seed covering structures) had significant impacts on germination and dormancy, with crop-produced achenes germinating most readily, followed by those produced on F1 maternal plants, followed by those produced on wild plants. 3 The proportion of crop alleles (i.e., nuclear genetics of the embryo) was also important. There was a significant, positive relationship between the proportion of crop alleles and germination in the wild and F1 produced seeds. Microscopy revealed that maternal parent significantly affected achene size, embryo size, and relationships between structures and the micropylar (i.e., pointed) end of the achene. Crop produced achenes were largest and had minimal structural barriers to radicle (i.e, embryonic root) extension. F1 produced achenes were larger and had more substantial barriers which broke down quickly. Wild produced achenes were smallest and had the greatest barriers to radicle extension. Although they differed in size, structural characteristics, and germination rate, seeds produced on crop, F1, and wild maternal parents underwent the same general processes of leading up to germination. These findings suggest that crop alleles and the maternal effects associated with crop-wild hybridization can reduce dormancy, but that this reduction in dormancy may not be significant enough to prevent the introgression of crop alleles into wild populations.