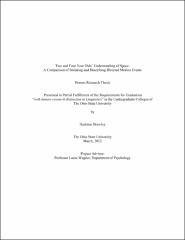 In this study we investigated the relationship between language and thought and whether it changes with language experience over time. As language skill matures in children, does their linguistic representation of an event influence their non-linguistic representation of the same event? We also investigated the nature of this influence; that is, does the linguistic perspective globally inform all non-linguistic tasks? Does it locally inform those nearby in time? Two-year-olds (mean age 31.91 mos) and four-year-olds (mean age 53.17 mos) were presented with Directed Motion (DM) events and analyzed them in a linguistic and a non-linguistic domain. DM events consist of a body in motion moving between points in space. The motion contains a trajectory, the Path, and the characteristic quality of the motion, the Manner. The linguistic task was elicited description, and the non-linguistic task was the forced imitation choice with two phases. In the first phase (Direct) children exactly imitated a DM event performed with a stuffed animal on a foam core ramp. In the second phase (Choice) children imitated modeled events on an environment that differed from the experimenter's in such a way that they could only imitate either the Path or the Goal of the modeled event. The study found that two-year-olds did not prefer components in either task, but showed an order of task effect. When they imitated first, they directly imitated all components correctly more often and described Path more often. Four-year-olds did not show this order of task effect. This suggests that for younger children, the strategy used for whatever task they performed first carried over into the subsequent task. Older children did not perseverate, having already solidified the means with which they carry out tasks in different domains. Also, this suggests that gaining language experience changes the relationship between language and thought over time.