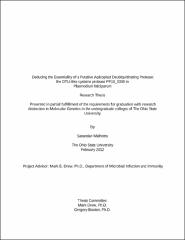 Plasmodium falciparum is a protozoan parasite of the phylum Apicomplexa that is responsible for causing malaria in humans in many parts of the world. Antimalarials are very effective at curing the disease; however resistance to current antimalarials has emerged among Plasmodium strains as the parasite continually evolves (1). This has generated the need to develop new drugs to control this global public health problem. This project investigates a putative vital component of the apicoplast specific ubiquitination system in the parasite as a potential target for therapeutic intervention. The apicoplast is a plastid organelle in the parasite and is necessary for parasite survival (2). The apicoplast ubiquitination pathway is proposed to be involved in regulation of apicoplast specific protein levels via the covalent modification of misfolded or improperly assembled proteins; it does this through ubiquitination (2). The ubiquitin monomer levels in this pathway are maintained by the deubiquitinating proteases (DUBs), which catalyze the hydrolysis of the protein-ubiquitin bond prior to the protein being catabolized. Removal of ubiquitin from a misfolded protein helps to regenerate and maintain proper ubiquitin monomer levels. Thus the DUBs play an important role in perpetuating this pathway and regulating the recycling of ubiquitin in the cell. Using bioinformatics based homology searching the OTU-like cysteine protease PF10_0308 was identified to be a putative apicoplast localized DUB protease that appears to be conserved across Apicomplexan genomes (3). We hypothesize that in P. falciparum this DUB functions specifically in a ubiquitination pathway within the apicoplast. It possibly serves to recycle ubiquitin via its removal from the misfolded proteins prior to their entry into the proteasome for degradation. If this DUB activity is inhibited, then ubiquitin monomer recycling would cease and render this pathway non-functional. Due to lack of an available pool of ubiquitin monomers, misfolded proteins would no longer be targeted for catabolism. This could lead to protein aggregates which in turn might make the apicoplast inactive, leading to parasite death. In order to deduce the essentiality of putative apicoplast localized DUB, (here on, Api-DUB) in the parasite we applied genetic engineering techniques of molecular cloning and transformations to alter the structure and characteristics of the gene. We have generated a transgenic line of parasites with a variant form of the apicoplast DUB (Api-DUB) gene that encodes a fusion Api-DUB protein. This gene contains a construct which allows regulation of Api-DUB protein at the post-translational level. By inhibiting protein expression via post-translational attenuation, Api-DUB activity is reduced in the parasite. Observing differences in growth phenotype or viability in comparison to the parasites with a functionally active Api-DUB will help to determine whether it is essential for parasite viability. The integration of the construct has been confirmed, via western blotting. Preliminary efforts have observed a decreased growth rate and eventual death phenotype in parasites lacking a stable and active DUB protease. However, the DUB essentiality to the parasite needs to be confirmed by use of multiple clonal cell lines in order to validate the studies. The next immediate effort includes determination of the site of integration and orientation of the gene construct in parasite genome. If Api-DUB is confirmed as an essential component of the parasite then further structural studies to aid in discovery of selective inhibitors would be pursued. It is likely that this pathway is localized to the apicoplast, a plastid organelle essential for parasite survival. Thus, we hypothesize that this apicoplast associated ubiquitination pathway constitutes highly significant and vital component of these medically relevant parasites (2). Furthermore, the prokaryotic origins of the metabolic pathways in the apicoplast make it a promising target for drug development.