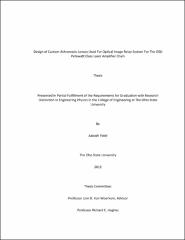 The Science Center for the Advanced Research on Lasers and Engineered Targets (SCARLET) laser system of the High Energy Density Physics research group at the Ohio State University is built to study laser-matter interactions at very high intensities. Ultrashort pulses are needed to generate such high intensities. Ultrashort pulses require large bandwidths. The SCARLET laser system is undergoing a major upgrade and part of the new system is a Keplerian telescope that relays the laser pulses. The function of the telescope is to magnify the pulse profile while relaying the image in its most intact form possible. The aberrations created by the lenses of the telescope need to be minimized in order to preserve the image quality. In this kind of application, the adverse effects of the thickness of the lenses and chromatic aberrations become apparent because of the broad spectrum. In order to focus all wavelengths (770 nm to 850 nm) at the same point and re-collimate them, custom designed multi-element lenses needed to be used After learning about achromats, aberrations and principles used to minimize the aberrations, lens design software OSLO was used for computer aided ray-tracing and analysis of optical performance. Ray tracing analysis shows that the custom designed lenses significantly outperform their singlet counterparts in terms of aberrations induced. The design was finalized after thorough review and was sent for manufacturing. The lenses have been manufactured by an optics company and they are now utilized in the telescope with no problem with their optical performance. This thesis discusses how such compound achromatic lenses work, how these lenses were designed and how their theoretical performance compares to that of simple plano-convex lenses.