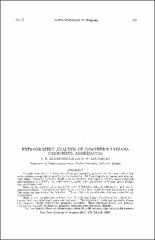 A study was made to determine those petrographic parameters that are correlative with carbonate-aggregate quality as indicated by the Los Angeles abrasion and absorption tests. Samples collected at 28 sites in northern and eastern Indiana were analyzed petrographically, chiefly for void content, grain size, grain-size variation, grain shape, and grain interlock. Most of the sampled sites are in the belt of Silurian rocks of east-central and northwestern Indiana. Though a few sites lie outside this belt, most of these have only a thin Devonian section above the Silurian. Three sites are non-Silurian and are included for comparison. Most of the samples studied are from Middle and Upper Silurian units. Both biohermal and nonbiohermal facies are included. The biohermal rocks are typically dense but vugular, finely crystalline granular dolomite. Nonbiohermal facies are porous, medium to coarsely crystalline, granular dolomite with dolomite rhombs. The Los Angeles abrasion losses ranged from 20 to 46 per cent, the rocks in the eastern part of the state showing the higher values. Absorption tests indicate the same general quality trend. Comparison of petrographic studies with Los Angeles abrasion- and absorption-test results indicate the following correlations. (1) As per cent of voids increases, quality decreases. (2) As average grain size increases, quality decreases. (3) Variations from mean grain size appear to have no effect on the quality. (4) As angularity and roughness of the grains increase, quality increases. (5) As grain-to-grain interlock increases, quality increases. Variations in the calcium-magnesium ratio have no apparent effect on aggregatequality, except as they affect the texture.