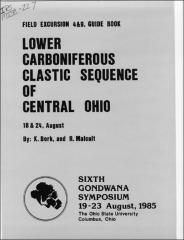 This guidebook was produced for participants of the Sixth Gondwana Symposium held at the Institute of Polar Studies in August 1985. Field Trips 4 and 9 will present a stratigraphic overview of Lower Carboniferous (Lower Mississippian; Tournaisian) clastic units in the Granville Newark area, approximately 50 kilometers to the east of Columbus, Ohio. The sediments incorporated into the local strata were derived from the emergent land to (what is now) the east. It was a time of tectonism associated with the evolution of the Appalachian Mountains and the coalescing of continental masses to form Pangea. In terms of modern geography, the sediment was transported from east to west by fluvial and deltaic feeder systems. At the time of deposition, the region is thought to have been situated 5-15 degrees south of the equator. Our survey of the local stratigraphy will focus upon the Cuyahoga and Logan Formations. Among the aspects of the local geology to be considered will be outcrop expression of the various members, facies relationships, sedimentary structures, the fossil biota, paleoecologic inferences derived from paleocommunity analysis, and general interpretations concerning the paleogeography during the Early Mississippian.