Sedimentology of the Salem Limestone in Indiana 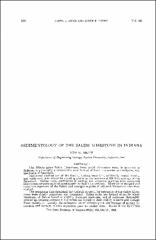 The Mississippian Salem Limestone, from which dimension stone is quarried in Indiana, is principally a calcarenitic rock formed of fossil bryozoans, echinoderms, and specimens of Endothyra. Numerical associations of the fossils, binding materials, oolitically coated fossils, and voids were determined by counting points on the surfaces of 278 thin sections of the limestone. Median sizes, coefficients of sorting, and skewness numbers were computed from measurements made of constituents in these thin sections. Many other samples and numerous exposures of the Salem and contiguous parts of adjacent formations also were studied. The organisms that furnished the skeletal material for formation of the Salem Limestone were chiefly gregarious and communal. Salem rocks are formed of nearly whole skeletons, of dismembered or slightly damaged skeletons, and of skeletons thoroughly ground up, because currents in the Salem sea varied in their ability to move and damage these materials. Locally the sediments are of uniform grain size because of sorting by currents and because related organisms grew to similar sizes. Rocks of the formation contain different proportions of the fauna both because the animals lived in these proportions and because their skeletons were mixed together by currents. The proportional relationships between members of the fauna were constant locally and for short periods of time. Study and mapping of the faunal associations, numbers of oolitically coated fossils, bedding structures, and size parameters enables geologists to suggest sedimentologic histories and sequences in areas of various sizes. Interpretations based upon such areal studies are necessary for evaluation of the dimension-stone potential within the Salem Limestone.