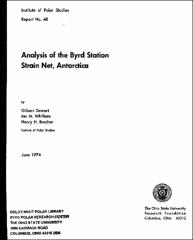 Institute of Polar Studies Report No. 48.

This report presents some results of field investigations relating to the study of glacier flow in Marie Byrd Land, Antarctica. The physical quantities necessary for a solution to the problem of the mode of flow of the continental ice sheet in the Ross glacial drainage basin are being sought by several principal lines of investigation: determination of surface strain rate and surface slope by analysis of precise surveys of the Byrd Station Strain Net that have been carried out by the Topographic Branch of the U.S. Geological Survey; determination of strain rate and temperature distribution at depth in the deep hole at Byrd Station drilled by the U.S. Army Cold Regions Research and Engineering Laboratory; determination of ice thickness and of glacier bed configuration and conditions by geophysical exploration, including seismic, gravimetric, magnetic and radio-echo sounding methods; analysis of the structure and dynamic physical properties of ice; and observation of snow deposition and metamorphosis and surface morphology in order to explain parts of the core from Byrd Station deep drill hole, and estimate the mass balance. Much of the material presented in the report is based upon observations made by field parties which were based at Byrd Station and operated in the region of the Byrd Station Strain Net, which lies between Byrd Station and the Ross-Amundsen ice divide, during the austral summers of 1967-68, 1969-70, 1971-72, and 1973-74.