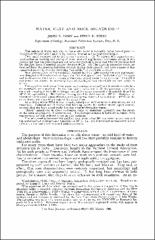 The nature of water and clay in carbonate rocks is currently being investigated at Rensselaer Polytechnic Institute by various thermal and sorption techniques. Two basic concepts led to the present research. (1) To explain the expansion and contraction on wetting and drying of some unsound argillaceous carbonate rocks, it was postulated that the pore space around each clay particle is such that when water is sorbed by the clay, force is exerted against the pore walls. (2) The clays in expansive rocks are rejected from the growing dolomite crystals during their growth, and form a more or less connected network, thereby becoming "wettable," or available to water. New quantitative cold differential-thermal-analysis (electrocalorimetric) equipment was designed and constructed to check the "limited space" and "wettable clay" concepts and to determine the thermal nature of the transition of water to ice in rocks. This DTA equipment can detect the release of heat in freezing of less than 0.001 per cent water in a rock. Twenty-three rock cores (nine sound and fourteen unsound) and 4 procelain cylinders for standards were studied. In the nine sound rocks and in all the procelain cylinders, the rapid freezing of from 50 to 100 per cent of the water was readily detectable after 7 to 10° C of supercooling. No further freezing could be detected to —20° C. However, in eleven of the fourteen unsound rocks, no freezing was detected to as low as —40° C; in the other three, less than 50 per cent of the water froze. As a check of the DTA measurements, adsorption isotherms were determined for all materials. Calculations of theoretical freezing points for sorbed water again demonstrated that the least sound rocks had the most nonfreezable water. "Frost" sensitivity in these carbonate rocks is, therefore, probably not the result of the force of expansion of water to ice. The disruptive force is believed to result from expansion of sorbed, ordered water on clay surfaces. The relationship between the unfilled rock pores after 24-hour water saturation and the water sorbed at 85 per cent humidity at 30° C (i.e., the theoretical nonfreezable water delineates the sound and unsound carbonate rocks.