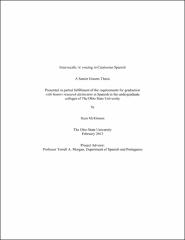 Ever since the early fifteenth century, Catalan and Spanish have been in contact with one another. This situation of language contact would logically give rise to a unique dialect of Spanish, that being Catalonian Spanish. However, this variety has been widely ignored by the academic community at large; it was not mentioned in Zamora Vicente’s book on Dialectology in Spain and the influential Spanish linguist John Lipski makes no mention of it in any of his works on Spanish dialectology or language contact in the Spanish speaking world. Although research has been dedicated to the study of how Spanish influences Catalan there have been few studies on how the Spanish spoken in Catalonia is influenced by Catalan, especially in terms of phonology. The present study looks at intervocalic /s/ voicing in Catalonian Spanish as a product of contact-induced change and seeks to describe the linguistic and sociolinguistic factors that favor the voicing of /s/. Furthermore, this paper will argue that /s/ voicing is not a byproduct of the Spanish brought to Catalonia by the Castilians, but rather the imposition of a specific Catalan phonological rule onto the bilingual’s spoken Spanish. Finally, the results will support other findings and principles guiding /s/ voicing in Spanish, particularly in regards to the current research being done on Ecuadorian Spanish.