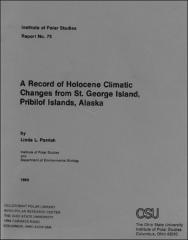 Institute of Polar Studies Report No. 75.

A suite of lake and bog cores from St. George Island, Pribilofs, Alaska, were analyzed for pollen and stratigraphic changes. The lakes studied appear to have formed well before 5000 B.P. Their formation appears to be a result of a major climatic change, and is perhaps related to the flooding of the Bering Land Bridge. A second episode of climatic change is suggested by a change in the nature of the lake sediments. Just prior to 4845 B.P., the grey clay which had accumulated during the early part of the Holocene was replaced by a more organic brown clay. The higher organic content of the brown clay may be the result of an increase in lake productivity reflecting the warmer temperature of the Hypsithermal. The formation of two bogs between 6800 B.P. and 5500 B.P. is consistent with a hypothesis of change at this time. An indication of more recent climatic change is found in the three pollen diagrams from the St. George lake cores. At approximately 3000 B.P., an increase in Umbelliferae pollen and a decrease in Artemisia pollen are evident, reflecting a change in the local vegetation. The date of this vegetation change is similar to the date of 2980 B.P. for the second episode of bog formation on the island. Both of these dates are comparable to the dates of 3000 to 3500 B.P. associated with the Neoglaciation. Thus, a correlation is suggested between these events and the inferred regional cooling which initiated the Neoglacial advance.