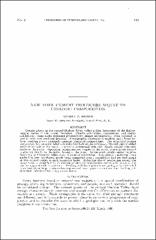 Cement plants in the central Hudson River valley utilize limestones of the Helderbergian Series of the Lower Devonian. Chiefly calcilutites, calcarenites, and cherty calcisiltites, these rocks represent progressively deeper environments, from lagoonal to neritic, with scattered reef deposits. Stratigraphic continuity is marked, and a layer-bylayer analysis shows strikingly constant chemical compositions. The structural picture varies from flat-lying and relatively unfaulted beds on the northwest, through gently folded and faulted beds on the north, to complex overturned beds with closely spaced imbricate faults on the south. Operating techniques are simpler in the north, where grade control is effected chiefly by the initial layout of the faces. In the south, grade control requires flexibility and frequent adjustment of faces or scheduling. A system of quarrying along strike has been developed, grade being computed from a cumulative foot-per cent graph of the critical oxides in each mappable layer. Balancing shovel production among the many faces is simplified by comparing production requirement ratios with ratios of the various types of rock in each face. Drilling and blasting limits are geologically controlled if warranted, or large blasts embracing several rock types are shot and the resulting pile of broken rock is staked along shovel limits.