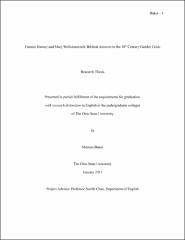 My reading of Frances Burney's and Mary Wollstonecraft's works explores their reactions to sentimentality in the late 18th century and focuses on ideas regarding a restoration of traditional manhood. In this thesis, I propose that Mary Wollstonecraft's A Vindication of the Rights of Women counteracts the sentimental claim that women were inherently inferior to men by arguing that God created the two sexes equal on a moral and spiritual level. Though published fourteen years before Vindication, Frances Burney's Evelina deals with many of the same issues. Burney's novel Camilla, published four years following Wollstonecraft's Vindication, picks up where Wollstonecraft left off in criticizing sentimentality. Most literary criticism of these texts has resulted in a secular reading, but there is no denying the influence of the Bible and Christian thought on English writers of the eighteenth century. By focusing on Burney and Wollstonecraft's use of Biblical texts, this paper provides an alternative to existing scholarship and engages with ongoing issues surrounding definition of gender roles.