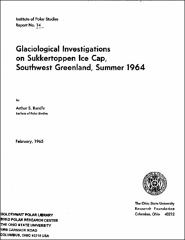 Institute of Polar Studies Report No. 14.

Glaciological studies were made on the Sukkertoppen Ice Cap, southwest Greenland, during August, 1964. Temperatures at depth indicate that much of the ice cap is temperate. Zonation according to Benson's facies concept is complex and there is probably overlapping of facies. Accumulation across the ice cap appears to be fairly uniform and any differences from one locality to another are small. Snow pit and core analysis show significant variation in accumulation from year to year, in some cases as much as 100 per cent. Along the traverse route the mean net annual accumulation is 31 cm of water. Some processes involved in firn densification in the soaked facies of Benson's classification are discussed.